Reflecting the growing investor interest in HR technology startups, Fetcher, the talent acquisition platform formerly known as Scout, today closed a $27 million Series B funding round led by Tola Capital with participation from G20 Ventures, KFund and Accomplice. The new money — $7 million in debt and $20 million in equity — brings the startup’s total capital raised to $40 million, which co-founder and CEO Andres Blank says is being put toward international expansion and building out the Fetcher platform with new applicant tracking system (ATS) integrations and customer relationship management capabilities.

Fetcher was co-launched in 2014 by Blank, Chris Calmeyn, Javier Castiarena and Santi Aimetta as a professional networking app called Caliber. After a few years, the founding Fetcher team decided to pivot into recruitment, leveraging some of the automation technology they’d built into Caliber.

“Hiring high-quality, diverse candidates had always been a pain point for me. At one of my prior startups, I personally experienced this issue, and after bringing on a recruiting team to help scale hiring efforts, I saw that their time was also too valuable to be spent on the manual, repetitive tasks that come with sourcing candidates,” Blank told TechCrunch in an email interview. “Rather than relying on expensive staffing fees, I thought there must be a better way to keep sourcing in-house, without it taking up too much time and energy on the talent acquisition teams and hiring managers.”

Through a Chrome extension, Fetcher’s platform ties in with ATS products as well as Gmail and Outlook to allow recruiters to source candidates directly from LinkedIn. Fetcher filters jobseekers into prebuilt email workflows, offering analytics including progress toward diversity goals at the individual, team, position and company levels. 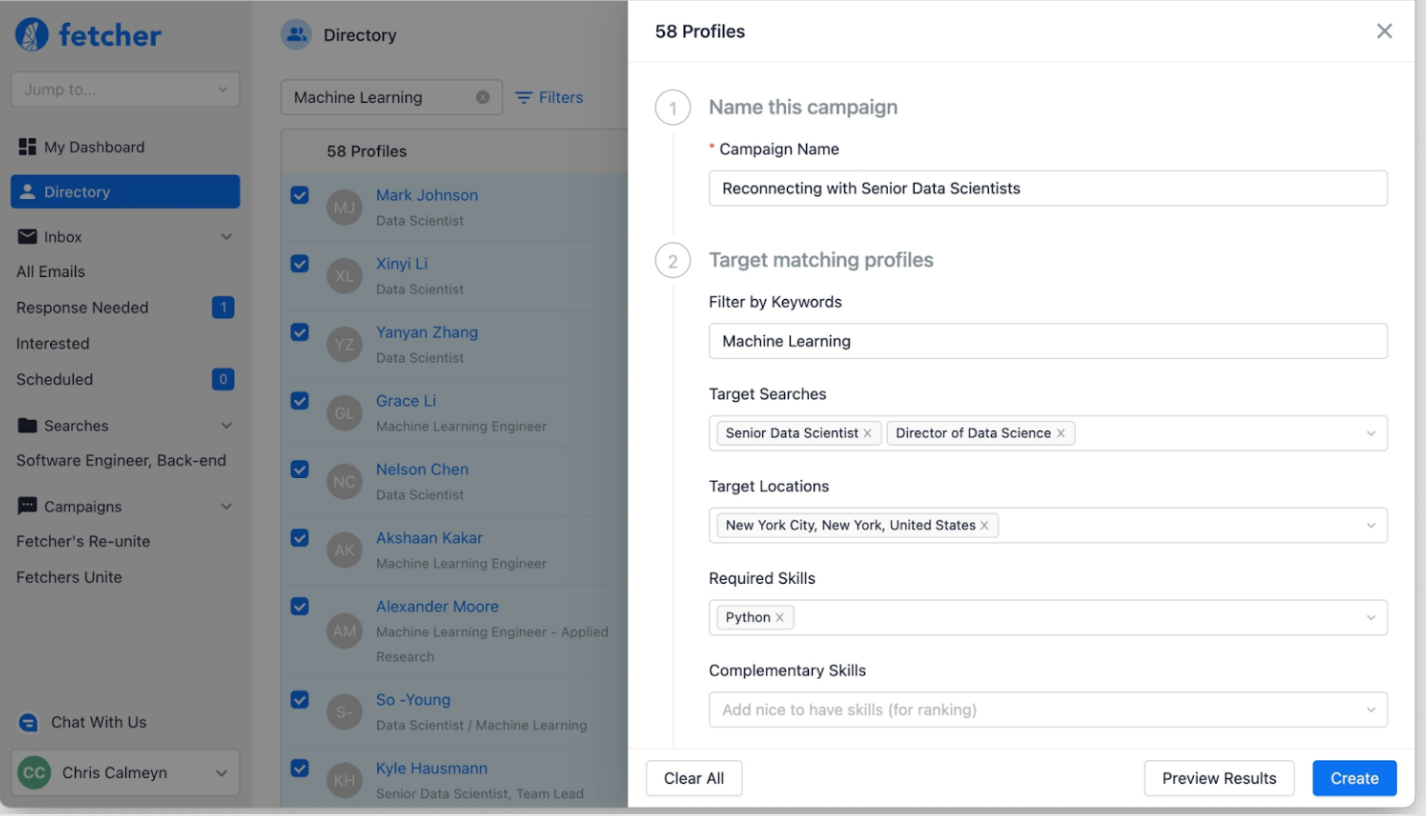 Fetcher also performs predictive modeling, automatically gauging the interest of job candidates from their replies, and “automated sourcing,” which runs in the background to push applicants through vetting processes via automated emails.

“A great candidate experience is essential for any company, and part of that experience comes from building long-term relationships with candidates over time. Fetcher’s candidate directory allows companies to remarket to qualified candidates, set up reminders for future connections, and add additional outreach emails to the automated sequences,” Blank said. “Overall, the goal is to make it simple for companies to store, update, and connect with great candidates over time, messaging them about future job opportunities, milestones at the company, and more.”

The reliance on algorithms is a bit concerning, given the potential for bias — Amazon infamously scrapped a recruitment algorithm that favored male engineers and New York City recently placed restrictions on the use of AI in hiring. When asked about it, Blank asserted that the platform’s automation technologies allow for “a more diverse group of prospects” to push through the hiring funnel. He also highlighted Fetcher’s outreach policy, noting that people who don’t wish to be contacted about opportunities via Fetcher can send data deletion requests.

“[O]ur secret sauce here at Fetcher is combining both machine and human intelligence in order to minimize the biases that exist on both sides,” Blank said. “Beyond this, we also have diversity metrics on each search (visible on our platform to the client too), which keeps us in check. If we’re over- or under-indexing anywhere on the gender or demographics front, the platform can course correct. Finally, we remove selection biases from the client. The way we do this is that once a client trusts that the search is heading in the right direction (after vetting a handful of candidates upfront), they place the search on full automation. This means that going forward, they are no longer vetting every candidate, but simply reaching out to all qualified candidates that are found for [a given] open role.”

Blank linked to case studies from customers like Frame.io, which recently used Fetcher to hire employees mostly from underrepresented groups. But biases can enter at many different, often unpredictable, stages of the pipeline. As Harvard Business Review’s Miranda Bogen writes: “For example, if [a] system notices that recruiters happen to interact more frequently with white men, it may well find proxies for those characteristics (like being named Jared or playing high school lacrosse) and replicate that pattern. This sort of adverse impact can happen without explicit instruction, and worse, without anyone realizing.” 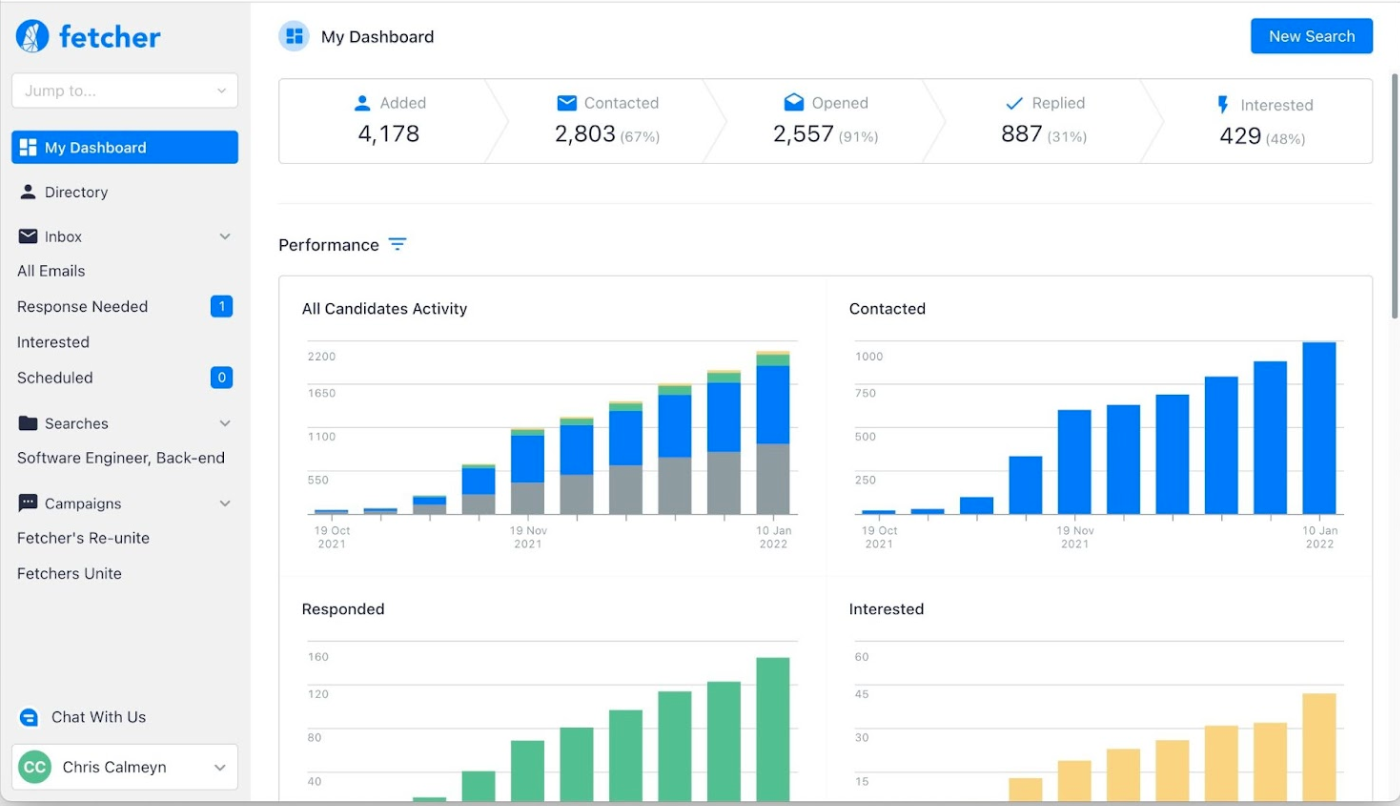 The risk doesn’t appear to be dissuading recruiters. Fetcher currently has over 350 customers (growing 10% month-over-month) including Behr Paint, Albertsons, Foursquare and Shutterstock., and annual recurring revenue tripled in the last 12 months.

Beyond the strong top-line numbers, Fetcher is benefiting from the broader boom in the HR tech segment, which has seen high venture capital activity over the past few months. According to PitchBook, HR tech startups collected more than $9.2 billion in venture capital funding globally from January 2021 to October 2021 — a 130% jump from 2020’s total.

“Fetcher is uniquely positioned as one of the only software-as-a-service recruiting platforms to automate both candidate sourcing and email outreach efficiently,” Blank said. “Rather than using a straight database model, Fetcher is the only sourcing solution that can truly automate the sourcing process for companies, based on its unique combination of ‘machine learning with human intelligence.’ This model allows for what feels like a 24/7 sourcer to work in the background for each client. By automating both the sourcing and outreach sides of recruiting, Fetcher can reduce the number of internal sourcers and recruiters a company needs, as well as significantly reduce the budget being spent on outside recruiting firms, agencies, or consultants.”

Fetcher employs 45 people, currently, and plans to double that number by the end of the year.