Fleet, a startup offering a service that helps to track and manage enterprise devices like laptops, today announced that it raised $20 million in a Series A round led by CRV with participation from angel investors including GitLab CEO Sid Sijbrandij. Fleet CEO Mike McNeil says that the new capital — which values the company at $100 million post-money — will be put toward scaling Fleet’s team and building a “more complete” device management feature set.

Managing employee devices was already tough for IT teams, but the pandemic made the job even tougher. In a recent survey commissioned by device management platform Kandji, 95% of IT professionals cited remote troubleshooting, onboarding and various forms of security as impediments to success. That’s perhaps why, according to a separate poll by Deloitte, the vast majority (84%) of organizations believe they lack a “truly effective” device management system.

Fleet aims to address common pain points with a “visibility platform” that manages not only laptops but computing infrastructure, such as Internet of Things (IoT) devices and servers. The company’s product acts as a source of truth for device data, allowing teams to see the health of a laptop battery, for example, or whether a file unexpectedly changed on a production server.

“Fleet lets teams — security engineering, incident response, IT, help desk, compliance, vulnerability management [and more] — ask questions about their devices and get answers,” McNeil said. “Some organizations have built their own Fleet-like solution from scratch to avoid vendor lock-in and allow them to modify the product as needed. But then they’re stuck with maintenance. Fleet enables teams building their own DIY security and IT solutions to get the best of both worlds.”

Fleet arose from an open source project called Osquery that was created by CTO Zach Wasserman together with Moonfire Ventures partner Mike Arpaia. Wasserman was a software engineer on the security team at Meta (formerly Facebook) and co-founded two companies, Kolide and Dactiv, before settling in at Fleet. Arpaia previously led software development teams at Etsy prior to joining Meta and helping Wasserman cofound Kolide.

Arpaia and Wasserman developed Osquery while at Meta to improve the social network’s internal operating system analytics. The two alongside Jason Meller, the CEO of Kolide, incorporated Kollide as a launchpad for Fleet, a version of Osquery adapted for enterprise settings. But the Kollide management’s attention eventually shifted away from Fleet and toward its separate, user-focused software-as-a-service offering.

After leaving Kolide, Wasserman continued as lead maintainer for Fleet and partnered with McNeil to commercialize the project under a new corporate banner: Fleet Device Management, Inc. 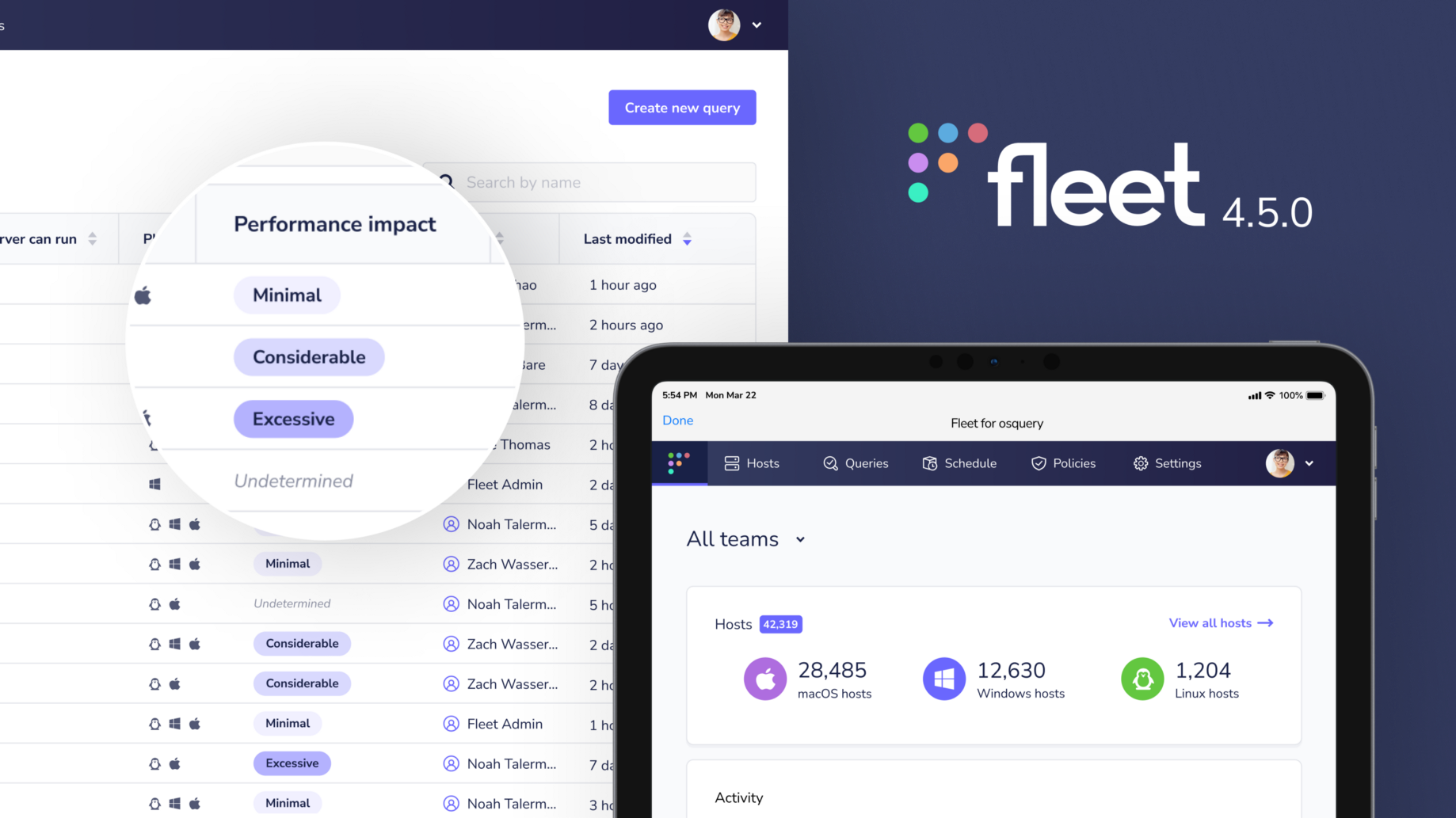 With Fleet, users can send snapshots of device data to existing platforms like Snowflake, Splunk, Elastic and SumoLogic. Fleet — which doesn’t store customer data, according to McNeil — can monitor for a range of environment changes, including when an unlicensed app or extension is installed on a laptop.

Fleet is inspectable and modifiable, and all of the service’s source code is available publicly on GitHub, including the paid features in Fleet’s fully managed plan.

“If a team needs a change, they can request a feature or they can just make the change themselves and try it out, then submit a pull request to share the code with other users,” McNeil said. “Out of the box, every feature in Fleet is programmable and available via a REST API and webhooks, which are useful for custom automation with internal tools or platforms like Jira, Zendesk and Tines.”

Fleet has competitors in Balena, the beleaguered Particle and Sternum, which specialize in enterprise-scale IoT device management. The company also competes with security-centered device management platforms like Axonius, which recently raised $100 million at a $1 billion valuation. Tech giants like Google and Apple offer their own solutions, it should also be noted, albeit confined to their respective operating systems and hardware.

Markets and Markets estimates that the mobile device management market will grow from $5.5 billion in size in 20221 to $20.4 billion by 2026. Expansion has been spurred in part by an uptick in the broader open source services market, which Markets and Markets predicts will expand to $50 billion by the same year.

McNeil points to the size of Fleet’s user base as evidence of the company’s success in the face of rivals. More than 1.65 million devices are currently under management, some from customers including Dropbox and Gusto.

“Fleet’s feature set is unique, but it works well to fill holes in mobile device management solutions like Jamf, and in security tools like Rapid7, Crowdstrike or CarbonBlack,” McNeil added. “Fleet closes the blind faith gap. The platform is a single, authoritative, developer-friendly source of truth for all device data, from servers to laptops, on any operating system.”

To date, 16-employee Fleet has raised $25 million. The company hopes to nearly double headcount to 40 by 2023 with an emphasis on software engineering roles.