Making the choice to adopt, or to find an adopting family, is a legally complex, emotionally taxing, expensive and time-consuming process. PairTree aims to make one part at least considerably easier and faster with its online matching platform where expectant mothers and hopeful adopters can find each other without the facilitation of an agency or other organization. The company has just raised a $2.25 million seed round, a rarity in the industry.

The path to adoption is different for everyone, but there are generally some things they have in common: Once the process is started, it can take upwards of $50,000 and over a year-and-a-half to organize a match. While some of this comprises the ordinary legal hurdles involved in any adoption, a big part of it is simply that there are limited opportunities for adoption, and compatibility isn’t guaranteed. As many people considering adoption are doing so on the heels of unsuccessful fertility treatment, it can be a lot to take on and a dispiriting wait.

Erin Quick, CEO and co-founder (with CTO Justin Friberg) of PairTree, said that the modern adoption landscape is marked by the fact that nearly 95 percent of adoptions are open, meaning there is ongoing contact between a biological mother and adopting family.

“They’ll be working together forever, and that makes finding a highly compatible match that much more important,” Quick, herself a happy adopter, told TechCrunch in an interview. But because of the way adoption is generally done — through agencies licensed by states — there are limitations on how far anyone involved can reach.

“It’s so bound by geography,” she said. “It’s regulated at the state level and has been facilitated by state level, not because of state laws — there’s no rule saying you can’t adopt out of state — but because the facilitators are small nonprofits. They bind themselves to their geographic region because that’s what they can serve. We’re building a platform that makes what people are already doing much easier and more efficient.”

That platform is in many ways very much like a dating app, though of course the comparison is not exact and does not reflect the gravity of choosing to adopt. But like in the dating world, in adoption you have a cloud of people looking to connect over something highly dependent on personality and individual needs. 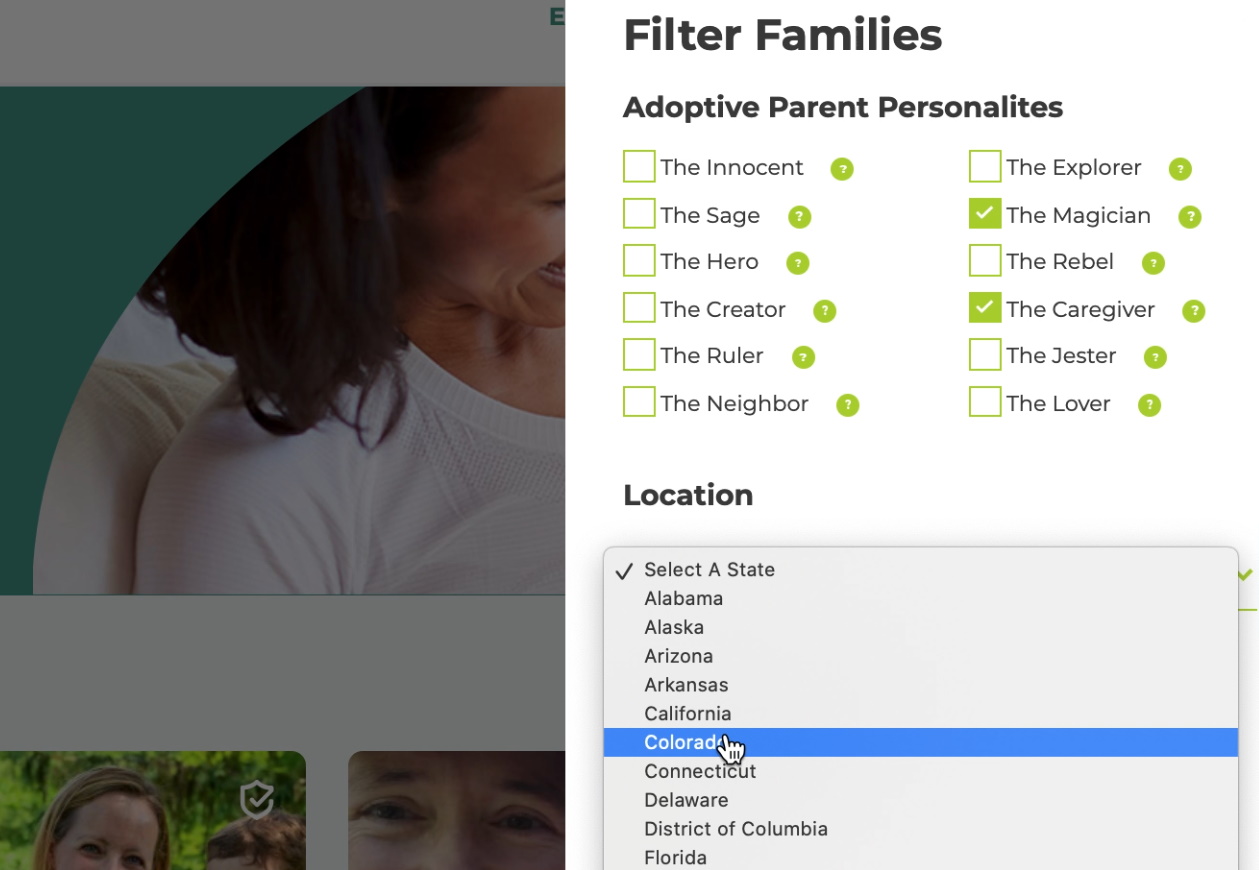 Screenshot of the way expectant mothers can filter and search for compatible adopting families.

PairTree onboards both expectant mothers and adopters with personality tests — not the light-hearted stuff of OkCupid but a broader, more consequential set of Jungian archetypes that signal a person’s high-level priorities in life. Think “wants to travel and learn” versus “wants to provide and nurture” (not that these are necessarily incompatible) — they serve as important indicators of preferences that might not be so easily summarized with a series of checkboxes. That’s not the only criterion, of course. Other demographic and personal details are also collected.

The adopters are added to a pool through which expectant mothers can sift and, if desired, contact (in this, Quick suggested, PairTree mirrors Bumble, where women must message first). PairTree also does basic due diligence stuff like identify verification and confirmation of other important steps like home studies.

If a likely match is found, all the relevant information is passed to the adoption facilitator, who will be coordinating the other legal and financial steps. PairTree isn’t looking to replace these agencies — in fact Quick said that they have been huge proponents of the platform, since it can shorten wait times and improve outcomes. She said based on their existing successful adoptions that the wait can be cut by half or even two-thirds, and thus the cost (which involves recurring payments as the agency searches and does the legal work) by a similar amount.

“These are small nonprofits; they don’t have a lot of tech chops. When we launched we went to attorneys first, actually, and we were surprised when agencies started reaching out,” she explained.

Agencies have been referring their adopters to PairTree, which has led to a lot of early traction, Quick said. And importantly, they’ve seen great diversity in their early success.

“Adoption has historically been denied by faith-based systems — LGBTQ families and single women have been subject to discrimination,” she noted. And in fact just last week a Supreme Court decision held up the right of religious adoption agencies to deny services to same-sex couples. Quick was proud to say that they have already facilitated adoptions by same-sex couples and single parents.

The company will also set aside 5 percent of its net profits, which hopefully will manifest in volume, for the Lifetime Healing Foundation, which offers counseling and support to birth mothers who have gone though the adoption process.

The $2.25 million seed round was led by Urban Innovation Fund, with Founder Collective, Female Founders Alliance and Techstars participating. It will surprise few to hear that adoption is not a particularly hot industry for venture capital, but rising interest and investment in fertility tech may have shed light on opportunities in adjacent spaces. Adoption is one where significant improvements can be enabled by technology, meaning startups can grow fast while having a positive impact.

The company plans to use the money to expand its product portfolio, pursue more partnerships, and perhaps most importantly for its users, build a native mobile app, since 90 percent of the service’s viewership is mobile.

“We’re grateful to our expert and diverse group of investors who share our vision that adoption should be a viable path to parenting for more people,” said Quick in the release announcing the raise. “Like us, our investors believe in the importance of supporting Biological and Adopting Families along with the Adoptees, because adoption is not a single transaction but a journey they’re taking over the course of a lifetime.”