Below, Greg speaks to two academics who were key EmTech Next speakers. First is David Autor, one of the world’s most prominent economists. Autor’s lecture, Work of the Past, Work of the Future, originally delivered as the prestigious 2019 Richard T. Ely Lecture at the Annual Meeting of the American Economic Association, formed the basis for the opening presentation at the EmTech Next conference.

Susan Winterberg, an academic who studies business and ethics, was a panelist who brought important, even stirring insights about the devastating impact automation can have on communities and how companies can succeed by protecting people against those effects. 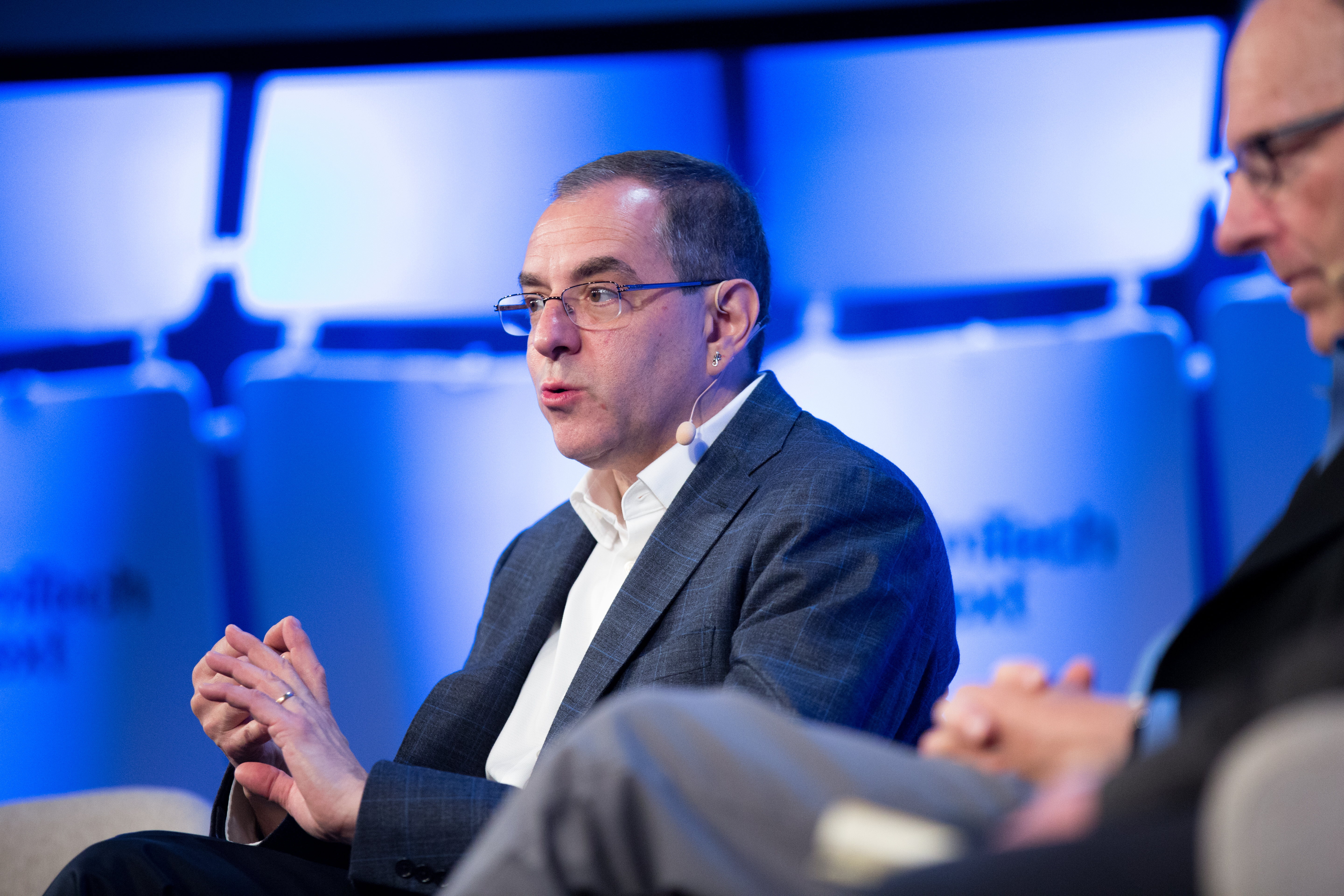 David Autor is the Ford Professor of Economics at MIT. Image via MIT Technology Review

Greg Epstein: Who do you see as the audience for your work — is it more labor or management, and how do different audiences engage with it differently?

David Autor: My primary audience, it can be argued, is other scholars. But I am aware of and pleased that my work has reached beyond that narrow group. I’m aware that it is discussed by policymakers and others and I’m sort of driven by trying to understand what is changing, who is affected, what are the opportunities, what are the challenges.

Could you help me to get a sense to the best of your knowledge of some of the key ways your ideas about the “Work of the Past, [and the] Work of the Future” of work” have been discussed by corporations or sort of those in management and business ownership roles and also by labor organizations or unions, etc.?

I met twice with President Obama. I have spoken with many people in senior governmental policy positions. I’ve spoken to a lot of private sector audiences as well, including private sector research corporations like McKinsey and so on.

I have spoken with labor people. Labor folks were initially quite hostile to my work. I got a huge amount of pushback and have throughout my career, for example, from EPI, the Economic Policy Institute, which is sort of a union shop in DC. The guy who was their chief economist for a long time, Larry Mishel, started attacking my first papers before they were even published, and it’s never stopped.

But I mean increasingly, and I find that super irritating.

In the last couple of years, I think there’s been a lot more receptivity to this discussion from many sides. I’m increasingly of the view that organized labor needs to have a more constructive role, that it’s become too marginalized. There might have been a time in the U.S. when it was too powerful, but now it’s too powerless.

I think organized labor accepted that the world’s changed in ways that are not just because of mean bosses and politicians, but there are underlying economic forces that impact the work people do. So they find the work illuminating.

What is your relationship with some of the more socialistic folks on the Democratic side?

I’m not into that. I believe in the value of the market system. I believe that it has a lot of rough edges, but I don’t think there’s a better system available that I know of. I’m very sympathetic towards market economies like Sweden and Norway and so on. I think the U.S. should move more in that direction. But those are all just variants of market economies. And actually, I think even what’s most often called socialism in the U.S. is actually, just really asking for a different variant of the market system.

That’s why I’m curious: if somebody from the camp of Alexandria Ocasio-Cortez or Bernie Sanders or even Elizabeth Warren were to call your office and say, all right, we want your perspective on how right are we getting it, or where would you advise us to course correct in our economic message? What would you say?

I met with Elizabeth Warren. I think some of what she has to say is great and some of it is dumb. I’m strongly in favor of more or better antitrust regulation, more consumer protections, more transparency, of the government doing more of certain things and getting the private sector out of it.

I think her idea, on the other hand, of paying off everyone’s student loans is a terrible idea, just a huge transfer to the affluent. So you know, she’s on the spectrum. She’s not calling for the overthrow of the state. She’s just calling for another variant of a market economy.

I take very strong issue, for example, with Bernie Sanders and his condemnation of charter schools, which I think shows how totally out of touch he is, that he doesn’t realize how much good charter schools have done for poor minority inner-city kids. He’s probably never met one. And so his white liberal teacher’s union view of, you know, charter schools are harming the public school system is just utterly, utterly misguided.

Are you familiar with a guy named Nick Hanauer? Do you consider yourself to be in his camp in some way?

I don’t know if I’m in his camp. I think he’s really concerned the level of inequality is unsustainable, and I’m concerned about that too. But again, other market economies don’t have the same level of inequality as the United States. But you could have a lot less inequality and then you’d be Germany or you could have still less and then you’d be Sweden. Right? But you’d still be a market economy.

So just to be clear. I mean, I consider myself a progressive. And before I came to MIT, before I even went to grad school I spent several years working in nonprofits doing skills education for the poor. A lot of my work has been driven by that.

What kind of skills education were you doing?

I did computer skills training for the poor at a black Methodist church in San Francisco for three years, and then I did related work as a volunteer in South Africa.